Bronnie Ware: “The Top Five Regrets of the Dying” (and what she’s learned since then) 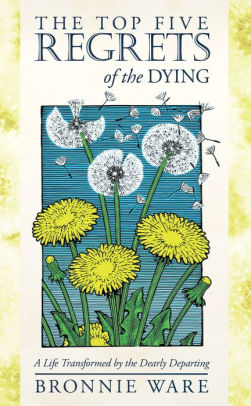 For years, palliative care provider Bronnie Ware helped people who were nearing the end of their life’s journeys. Her work included conversations with them about what regrets they had carried into their later years. These shared epiphanies led Ware to write a blog post that went viral and an eventual book, The Top Five Regrets of the Dying: A Life Transformed by the Dearly Departing(2012). Here are the top five regrets, as drawn from Ware’s conversations:

She explains each of these points in greater detail in this blog post. Her book, which I highly recommend, delves even deeper in this topic.

I wrote about Ware’s work back in 2011. Since then, I’ve traveled from my early 50s to my late 50s, and — my oh my — her words resonate even more strongly with me today.

Five years after publishing her book, she shared on her blog “Five Things I Have Learned Since Five Regrets” (link here):

Her full blog piece fleshes out her points and is definitely worth a read.

Great life lessons here. Gifts from those who have preceded us.

Cross-posted with my “Minding the Workplace” professional blog.

A 1937 must-see tearjerker for our times: Make Way For Tomorrow 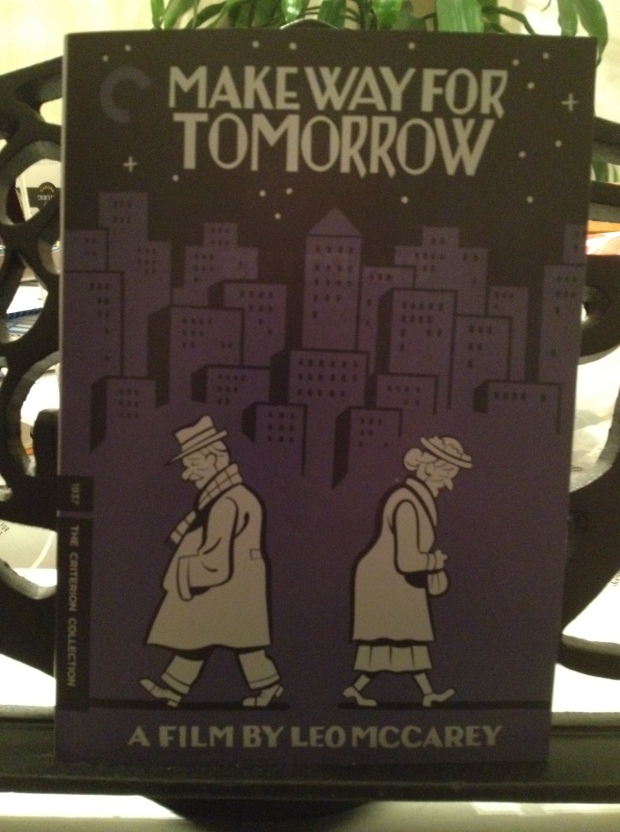 Last night I viewed a 1937 movie by Leo McCarey, Make Way for Tomorrow. It is a hidden classic, one of the most moving films I’ve ever watched. Here’s how the Criterion Collection describes it:

Leo McCarey’s Make Way for Tomorrow is one of the great unsung Hollywood masterpieces, an enormously moving Depression-era depiction of the frustrations of family, aging, and the generation gap. Victor Moore and Beulah Bondi headline a cast of incomparable character actors, starring as an elderly couple who must move in with their grown children after the bank takes their home, yet end up separated and subject to their offspring’s selfish whims. An inspiration for Ozu’s Tokyo Story, Make Way for Tomorrow is among American cinema’s purest tearjerkers, all the way to its unflinching ending, which McCarey refused to change despite studio pressure.

Lead actors Victor Moore and Beulah Bondi play Barkley and Lucy Cooper, the elderly couple who lose their home during the Depression. None of their five children are willing or able to take in both of them, so they must live apart with different offspring, several hundred miles away from each other. Family tensions arise, as both are seen as something of an inconvenience. In the meantime, Barkley and Lucy miss each other dearly.

Through the first two-thirds of the movie, I wasn’t sure I would end up agreeing with its “tearjerker” label. But during the last three scenes, which take place in New York City, I understood fully why Orson Welles said that Make Way for Tomorrow “could make a stone cry.”

Moore and Bondi didn’t win any awards for Make Way for Tomorrow. Of the popular movie performers of the era, they were well-regarded actors but were not considered stars. (Bondi is better known for playing Ma Bailey in It’s a Wonderful Life.) However, make no mistake about them: Their performances were masterful, and Bondi, especially, was heartbreakingly brilliant in this role.

A film for our times

Make Way for Tomorrow is much more than a classic old movie. It is wholly relevant to the challenging times in which we live.

The Great Recession and other setbacks have caused so many families to take in other family members. Our aging population has created hard caregiving decisions about where an elderly parent or relative might live. The movie reminds us that these questions, and the family dilemmas that come with them, are hardly new.

Make Way for Tomorrow is powerfully effective at getting us to look at life through the eyes of Barkley and Lucy. For those of us who have not reached senior status, it puts us in their shoes — and teaches us some important lessons in the process.

Beulah Bondi, it turns out, graduated in 1916 from Valparaiso University, my undergraduate alma mater! According to Dr. Richard Baepler’s history of the University, Flame of Faith, Lamp of Learning (2001), Bondi was “a leader in campus performance activities” and “participated in the lively theatre program.” Also, schoolmate Lowell Thomas, who would achieve considerable fame as a journalist and chronicler of the life of Lawrence of Arabia, “recalled that [Bondi’s] residence was a center of campus social activity.”

I watched the Criterion edition of the film. Criterion films are pricier than normal DVD movies, but they are beautifully produced and packaged with extras that enhance a viewer’s enjoyment and understanding of the movie. They typically include a booklet of essays about the featured film. I confess that Criterion editions are one of my consumer weaknesses, and periodically I hunt down the best prices I can find for them or wait for a sale at my local Barnes & Noble.

How will Generation Jones make its mark? 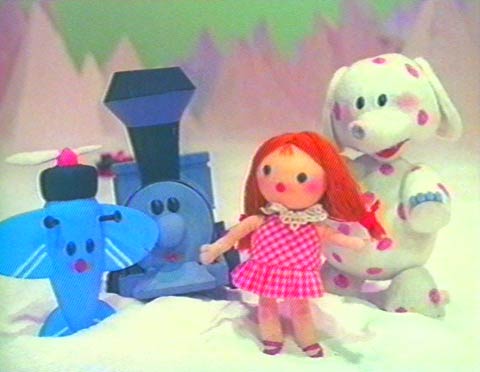 I can relate. (Photo: Screen shot from “Rudolph the Red-Nosed Reindeer”)

If you’re a card-carrying U.S. member of Generation Jones, you no doubt recognize this screen shot from “Rudolph the Red-Nosed Reindeer,” depicting some of the inhabitants of the Island of Misfit Toys, hoping that Santa Claus will pick them up some Christmas Eve and deliver them to loving homes.

And that, for me, captures how I feel about our chronological place in time. I think of Gen Jones as a group whose formative period missed out on the heart of the Sixties and preceded much of the gee-whiz launch of the Digital Age.

Instead, the Seventies come to mind, and I don’t necessarily consider that a good thing: Big, gas guzzling cars; a struggling economy; lots of cheesy pop music, TV, and movies; some pretty scary fashions; high crime rates and crumbling cities; and the outing of political corruption at a national level. Despite my Cancerian devotion to nostalgia, that’s one decade I don’t get all warm and fuzzy about.

More importantly, there’s a bigger question presenting itself, and that’s how we make our mark as a generation. I know I’m not alone in wrestling with these thoughts. The quest to find that narrative and purpose is said to be one of the defining characteristics of Gen Jones, as its Wikipedia entry suggests:

The name “Generation Jones” has several connotations, including a large anonymous generation, a “keeping up with the Joneses” competitiveness and the slang word “jones” or “jonesing”, meaning a yearning or craving. . . . It is said that Jonesers were given huge expectations as children in the 1960s, and then confronted with a different reality as they came of age in the 1970s and 1980s, leaving them with a certain unrequited, “jonesing” quality.

For now, it’s fair to say that the process of generational self-definition is a work-in-progress for Gen Jones.

Here’s one take on it…

Beth Wiggins, whose work brings together aging issues and community services, suggests that Gen Jones can make its unique contribution by how we handle our aging population. Here’s a piece of her article for MinnPost.com, “Time for the Jones Generation to Make Its Mark”:

We . . . have been given a name: Generation Jones. Born between the mid-1950s and the mid-1960s, you don’t hear much about the Jones cohort. Yet, we outnumber all other Boomers and Generation X. Jonathan Pontell, who coined “Generation Jones,” describes it as a large, anonymous generation with unfulfilled expectations. . . . But here we are at our midcentury mark, and we have an opportunity to step out and make a difference.

. . . And we must, whether motivated by pursuit of the greater good or pure self-interest. Generation Jones is the crest of the population age wave. We personify its biggest challenges and are especially vulnerable to the potential insecurities when the wave hits the shore. Health-care costs continue to escalate, and Medicare is in a precarious position. Professional care-giving work force shortages loom ahead. Dispersed families and the increasing prevalence of single-person households have implications for how informal care is provided in the future. How we approach aging matters.

A good conversation over a bite to eat

Just yesterday I enjoyed a quick meal with an old friend from high school who was in town on business. We hadn’t seen each other in decades, but Facebook put us back in touch. He’s got a ton of important work experience in both the private and public sectors, and he’s at a point in his life where he’s considering how to bring this accumulated wisdom to bear upon some of our larger challenges in creating a vibrant, socially responsible economy.

Our conversation covered a wide swath of what our generation has experienced over the past 30 years. For both of us, this includes witnessing the sharp decline of our hometown of Hammond, Indiana, once a thriving small industrial city in Northwest Indiana’s steel belt, now yet another Midwestern locale trying to hang on. We’ve seen good jobs at decent wages disappear, with massive shifts in wealth distribution to go along with it.

Will my friend be part of a creative solution? I’m betting that his myriad experiences, and what he’s learned from them, have led him to this point.

There’s no shortage of good works and noble deeds that need doing. That said, we’re in our 50s and late 40s. Realistically speaking, we have about a 20 year window to continue or begin creating the heart of our personal and collective legacies.

In other words, we can’t afford to feed a lot of angst about the world and our places in it. It’s game time, and we need to realize that.