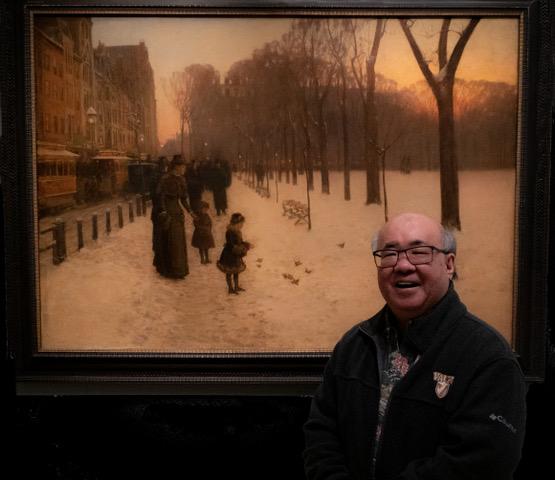 Appreciating “At Dusk (Boston Common at Twilight),” by Childe Hassam, 1885-86, during a recent trip to the Museum of Fine Arts with long-time friends Don and Sharon Driscoll, visiting from Illinois (photo credit to Sharon)

Friends, it makes my head spin to think that I’ve been living in Boston for a quarter of a century.

In the summer of 1994, I packed my bags and left New York City for a tenure-track teaching appointment at Suffolk University Law School in downtown Boston. Leaving New York was not easy for me. I had moved there from my native northwest Indiana in 1982 to attend law school at New York University, located in the heart of Greenwich Village, a truly wonderful urban neighborhood and one of my favorite places on earth. I fell in love with New York instantly, and that strong affection remained throughout my time there.

Boston, on the other hand, would prove to be an acquired taste. In fact, I struggled mightily with it for years. I found truth in its reputation as being a cold place for newcomers, and my early years here were downright lonely. In addition, I badly missed the 24/7 energy of New York. Boston, I would quickly learn, turns in a lot earlier by comparison. At times, it seemed more like an oversized, sleepy college town than a major metropolis.

And yet, I am still here. Although I have not yet claimed the status of Bostonian in the full-throated way I quickly called myself a New Yorker, I now understand that here is where I have grown into the best and truest version of myself so far. It hasn’t always been easy, and it has taken a heckuva lot longer than I would’ve preferred, but I feel pretty grounded, and I’m happy about that.

Among other things, in Boston I have developed my true vocation. At the time I left New York, I had yet to discover the core focus of how I could make my most meaningful contributions to the world. Little of what I now teach, research, write about, and advocate for was on my radar screen back then. Today, however, I have a strong sense of what I should be doing with my life. (You can get a better sense of my work by visiting my professional blog, Minding the Workplace, link here.)

But there’s more to it than that. In Boston, I have matured as a person and honed my personal culture. Important seeds of who I am today were definitely planted during my time in New York and other locales, but here they grew into something more definitive.

I’m still processing how and when Boston eventually felt like home to me. I do know that Boston is a more cosmopolitan place than the city that, uh, sorta greeted me in 1994, largely because of newcomers who have decided to stay and helped to make it a more inclusive and vital community.

I’ve also become more appreciative of Boston’s older, traditional side. Among other things, Greater Boston retains a strong intellectual component. This remains a place where books, ideas, learning, and history still count for a lot. I’m especially fond of its bookstores and libraries. Although I need to take greater advantage of them, I also enjoy Boston’s historical sites and museums.

In addition, as I’ve written before, there’s a lot of music here, including opportunities for even complete amateurs such as yours truly to make some of it. They include the voice class that I’ve been taking for many years and the karaoke studio that I frequent on an almost weekly basis.

I also enjoy the way I am able to live on a day-to-day basis. My neighborhood of Jamaica Plain is a neat place to live, with a diverse, eclectic populace. Boston is a great walking city. Its public transportation systems are showing their age, but they usually get me where I need to go. I have never owned a car here. (In fact, I haven’t owned a car since I moved to New York in 1982!)

Through it all, I’ve made a core group of friends here through the work we do and the music we make. (Interestingly, most of them are from other places, too.) I have also enjoyed playing tourist guide for friends and family who want to explore the city’s attractions.

As for New York, it will always hold a special place in my heart. I typically travel to Manhattan several times a year, and I always look forward to those visits. I have family and friends there, and on occasion I participate in conferences and workshops in the city as well. I long assumed that I’d move back to the Big Apple at the drop of a hat if the right circumstances arose. But in recent years I’ve reached a point where visits to New York are followed by a welcomed train ride back to Boston and its slower pace.

So is Boston to be my home for the duration? I’m inclined to think so, but who knows!? For now, at least, I am happy to call this place my hometown.