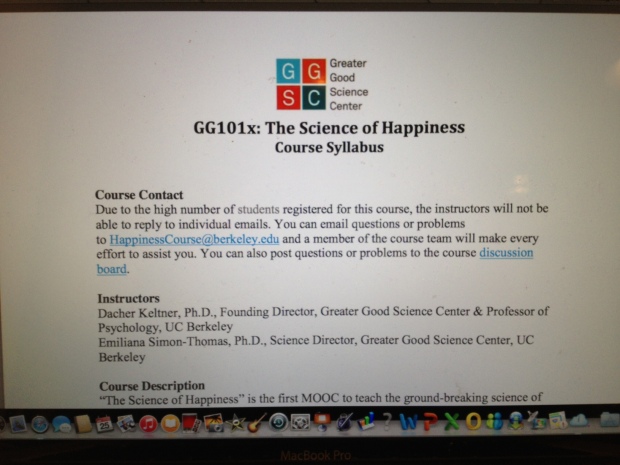 Maybe some of the course rubbed off on me.

Last November, I was crossing the street near Boston’s Faneuil Hall when I saw a man huddled in a blanket, shuffling past me in the opposite direction. I caught a glimpse of his eyes for only a second, but I could see a lot of sadness in them. When I got to the other side, I turned around and watched him make his way to a public bench, where he sat and seemed to just stare down.

I decided to go back across the street, and then I walked over to the man. I pulled some money from my wallet and offered it to him, saying that it looked like he could use something to eat. He appeared to be in very bad health, but when he saw that I was giving him twenty dollars and we began talking, his face lit up. He was very grateful for the money, and I believe he was appreciative that someone took a few minutes to converse with him.

What some might call a random act of kindness actually wasn’t all that random. Last fall I completed a non-credit, online adult education course, “The Science of Happiness,” led by psychology professors associated with UC-Berkeley’s Greater Good Science Center. It was a substantial course on emerging scientific discoveries about what makes people happy, with weekly readings, video lectures, and quizzes, as well as mid-term and final exams. Among our optional assignments was to engage in random acts of kindness, drawing on psychological literature indicating that giving promotes happiness in both the giver and the receiver.

Indeed, a little voice from that course was speaking to me when I walked up to that man and gave him money, and I found myself feeling very emotional afterward. Since then, I’ve repeated this act maybe a half dozen times, approaching people who appear to be very down on their luck, saying hello and giving them a twenty dollar bill. Over the weekend it was a man sitting on a subway bench with all of his worldly belongings stuffed into a grocery cart. Earlier this month it was a woman digging through a trash receptacle in search of food, a few feet away from where I was enjoying my lunch.

A couple of times the recipients didn’t say much to me, but on other occasions they expressed surprise and deep gratitude. One man even hugged me. When you see someone’s facial expression go from weariness and despair to a big smile in a matter of seconds, then you know you’ve made someone’s day a little better.

I have hesitated to put this in a blog post because I don’t wish to portray myself as being someone I’m not. I walk by most people I see panhandling on the street, and I’ve never volunteered at a homeless shelter. And let’s be honest: Twenty bucks isn’t exactly a huge sacrifice for a single guy earning a professional salary. But I thought I’d offer this story as just one example of how the non-saintly among us can make a modest difference in the world. No, it’s not “social change” in the grander way that I’d like to see, but if enough of us engage in these acts, then maybe the good stuff starts to add up to something substantial.

Your not-so-random acts of kindness need not be the same as mine. But I can pretty much guarantee that whatever you decide to do, both you and the recipient(s) will feel better because of it.

Go here if you’d like to learn more about the free “Science of Happiness” course.

This piece is cross-posted on my professional blog, Minding the Workplace.