Thirsting for knowledge and understanding at a bookstore 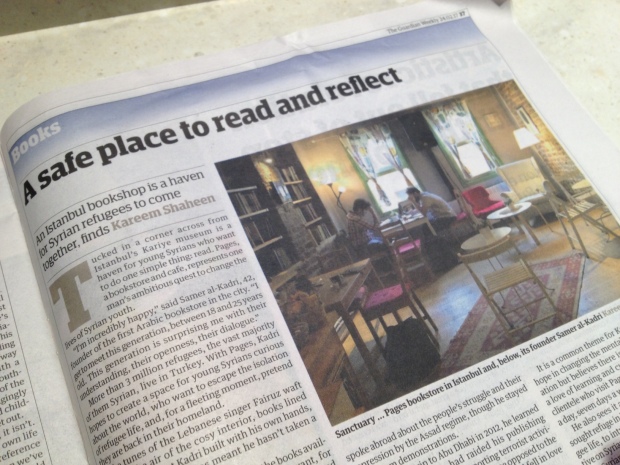 Imagine a bookstore as a sanctuary, a place of refuge to read, think, and reflect.

Reporting for The Guardian newspaper, Kareem Shaheen writes about Pages, a bookstore and cafe in Istanbul, Turkey, which serves that very role for Syrian refugees. The bookstore’s founder, Samir al-Kadri, wants nothing less than to “change the lives of Syrian youth”:

“I’m incredibly happy,” said Samer al-Kadri, 42, founder of the first Arabic bookstore in the city. “I get to meet this generation, between 18 and 25 years old. This generation is surprising me with their understanding, their openness, their dialogue.”

More than three million refugees, the vast majority of them Syrian, live in Turkey. With Pages, Kadri hopes to create a space for young Syrians curious about the world, who want to escape the isolation of refugee life, and, for a fleeting moment, pretend they are back in their homeland.

Not surprisingly, the most popular titles at Pages reflect a longing for their home country and a recognition of the terrible situation they left behind:

Among the most popular books at Pages are translations of Elif Şafak’s novel The Forty Rules of Love, which tells the story of the legendary Persian poet Rumi, as well The Shell, a memoir by the Syrian writer Mustafa Khalifa detailing his torture and detention in the notorious prison of Palmyra.

The translated works of George Orwell are also popular, particularly Animal Farm and 1984, the dystopian fictional worlds of which bear a striking resemblance to [Syrian President] Assad’s police state.

As I read this article, I thought about how easy it is for some of us to take for granted access to books.

I’m especially spoiled in this regard. I live in Boston, which, despite the general demise of brick and mortar bookstores, continues to offer abundant choices for buying and borrowing books. But even beyond such overly bookish locales, good books can be readily obtained via bookstores, online booksellers, used book sales, and libraries. Those on limited budgets can put together a very respectable personal library if they have a sharp eye for bargains.

It should humble the more fortunate among us that young refugees go to Pages bookstore in Istanbul in search of a safe and comforting place to read and learn. Let’s think about that the next time we’re tempted to watch a reality TV show or get caught up in a Tweet storm between politicians or celebrities. A bookstore, library, or simple shelf of books at home is a much better option for enriching our minds and souls.