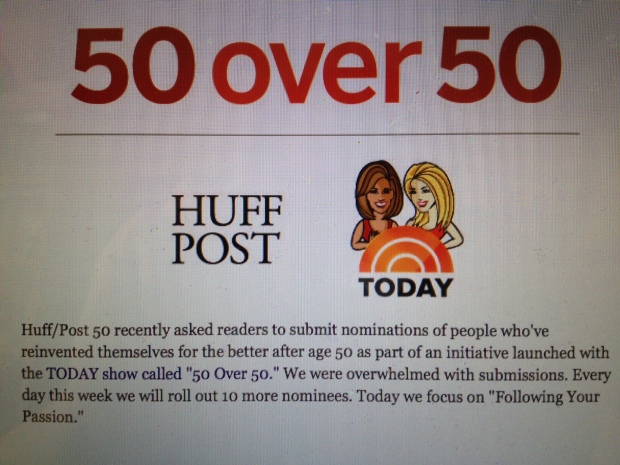 The Huffington Post just ran a terrific five-day series, “50 over 50,” profiling 50 individuals who significantly changed their lives after reaching age 50 and beyond. In partnership with the TODAY Show, they’re looking at how people have reinvented themselves later in their lives, often after experiencing major challenges. Here’s a piece of Shelley Emling’s introduction to the feature:

We recently asked readers to submit nominations of people who’ve reinvented themselves for the better after age 50 as part of an initiative launched with the TODAY show called “50 Over 50.” We were overwhelmed with submissions. We heard stories of people who’d changed their lives after losing a partner, getting divorced, or suffering financial hardship or a health concern. We heard from many people who nominated themselves — something they said they never would have done before turning 50.

Here are links to the five main stories posted this week:

The Risk Takers — 10 people who took risks after 50

Career Reinvention — 10 people who reinvented their careers after 50

Following Your Passion — 10 people who followed their passions after 50

Whatever your age, you’ll find inspirational stuff here. Especially for those over 50, this may speak directly to you. But even if you’re under 50, perhaps by many years, you may find this valuable, or at least worth tucking away until later.

This is drawn from a slightly longer version posted to my professional blog, Minding the Workplace.