A walking tour in Ancient Rome 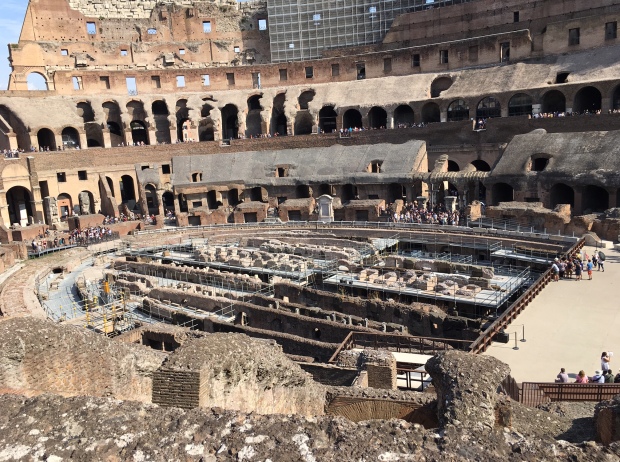 Inside the Roman Colosseum

During the last week of July, I found myself in the grand city of Rome. This first ever trip was occasioned by the International Congress on Law and Mental Health, a biennial global gathering at which I participated in panel discussions and other activities. (Go here to my professional blog to learn more.) Although I am not the best travel planner, Rome had been on my bucket list for many years, so beforehand I actually talked to people who had visited before and read up on sightseeing options.

More than with any other great city destination, friends and associates urged the importance of good tour guides to maximize the experience of a Rome visit. I picked up a copy of Rick Steves Rome 2019 (Steves has been my European travel guru for decades) and checked his listings for guided walking tours. There I found a company, Context Tours, that promised in-depth, small group tours conducted by guides who were genuine experts (often scholars) on the sites covered. Given my characteristic lack of patience for shopping, I decided to go “all in” with this company and signed up for three of their tours: Introduction to Rome, the Vatican, and Ancient Rome.

All three tours turned out to be excellent, led by guides — thank you Lauren, Jade, and Giulia — who are scholars of the city. It is the Ancient Rome tour that I’d like to spend some time talking about here. 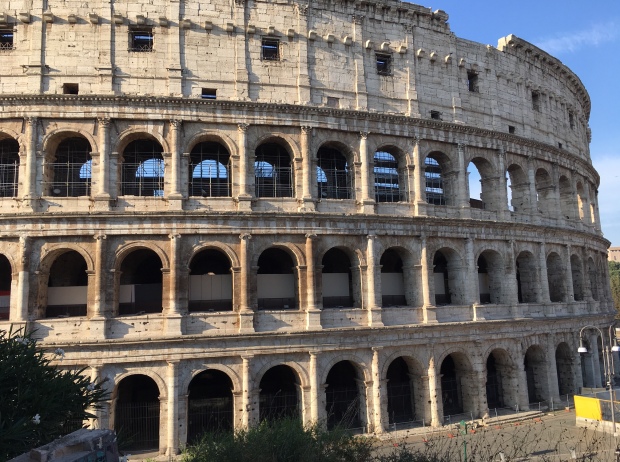 The Ancient Rome tour covers three tightly-clustered sites, the Colosseum, Palatine Hill, and the Roman Forum. Giulia, our guide, met up with her five guests (myself plus a four others who were traveling together) at a café across the street from the Colosseum, and we proceeded from there.

Let me just say that had the tour started and ended with the Colosseum, I would’ve considered myself fortunate. This is an imposing historic structure, a marvel of engineering. Moreover, there is a very haunting quality to it. Imagine some 60,000 people packed in there, watching and cheering for various spectacles and sporting competitions. Some were pretty gruesome person vs. animal and person vs. person fight-to-the-death contests, including gladiatorial combat so often depicted in pop culture portrayals of historic Rome.

Once you learn about the Colosseum, you instantly grasp the origins of today’s modern sports stadia, including seating according to status, the ancient equivalent of tailgating parties, and even access to restrooms inside the building.

At the conclusion of our walk around the Colosseum, this small group tour suddenly turned into a private one, as the other guests had to depart because of a schedule conflict. Although I enjoyed their company, this would be such a blessing for me, as my tour with Giulia became a sort of walking conversation, facilitated by a Ph.D. in archeology who has actually led and participated in digs in this very area.

Palatine Hill, minutes from the Colosseum

From the Colosseum, we walked over to adjacent Palatine Hill, the locus of Rome’s origins (according to ancient lore) and site of the Emperor’s Palace. It took all of a few minutes to get there.

As you can see from the photo above, it felt as if we were whisked away from the city and dropped off in a pastoral getaway setting. The contrast was kind of magical. I have felt that effect in other big cities, such as visiting the Cloisters in New York City — the big difference being, of course, that the medieval look & feel of the Cloisters was the 20th century result of the Rockefeller family donating money to create this old-looking structure. (OK, so maybe that’s not much of a difference at all, if you get my drift?!) 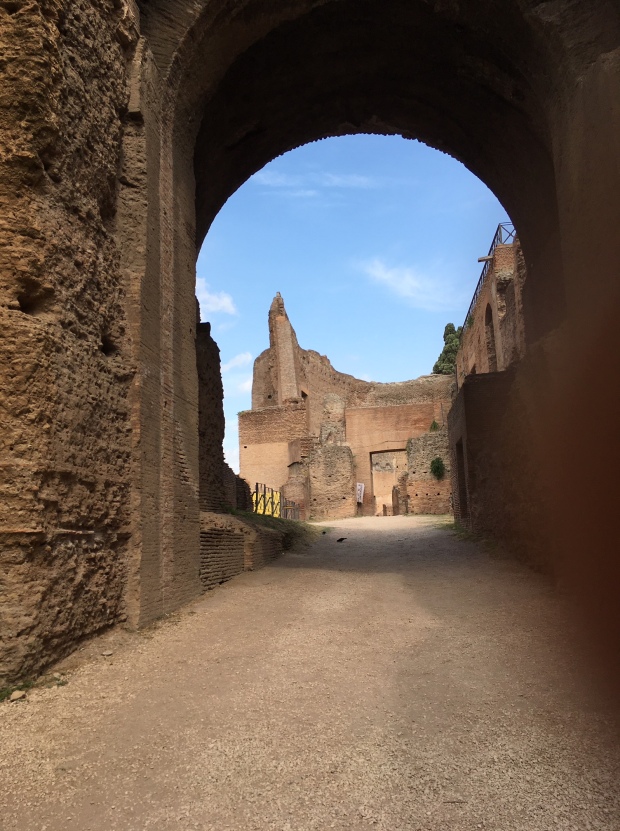 The ruins of the Emperor’s Palace

Now we’re getting into the ruins of the palace. Closer looks at these structures would reveal a variety of designs and colors, using raw materials imported from other parts of the world. This was a way of showing off one’s wealth, not to mention an early example of globalization. This reminded me of the concept of “conspicuous consumption,” a term coined by Thorstein Veblen, a late 19th and early 20th century American social scientist, to capture how rich people during the Gilded Age would buy things for the primary purpose of displaying the size of their bank accounts.

Indeed, as I learned more about the cultures of ancient and Renaissance Rome during my trip, I was reminded over and again that human motivations have not changed much over the centuries.

So here was a major revelation to me: Ancient Rome wasn’t a constant display of white marble! The photo above shows an example of the colorful designs that adorned many buildings and structures. According to Giulia, many of the buildings would look a bit kitschy by modern standards!

At the front of the dining hall

The photo above shows the front of the palace’s long dining hall, marked by an elevated dais for the Emperor and his family. Food and drink would be brought up from a lower level by servants, who also lived below. This prompted us to make comparisons to the upstairs/downstairs dichotomy of old English houses portrayed by the likes of the popular “Downton Abbey” television series!

If you’re trying to picture what mealtime looked like in this palace, don’t imagine tables and chairs. Instead, try to visualize these folks eating in bed! Yes, that’s right, the rich and powerful dined in the comfort of beds.

Thus, if someone ever treats you to breakfast in bed, then know that you’re dining in a fashion fitting for a Roman Emperor! 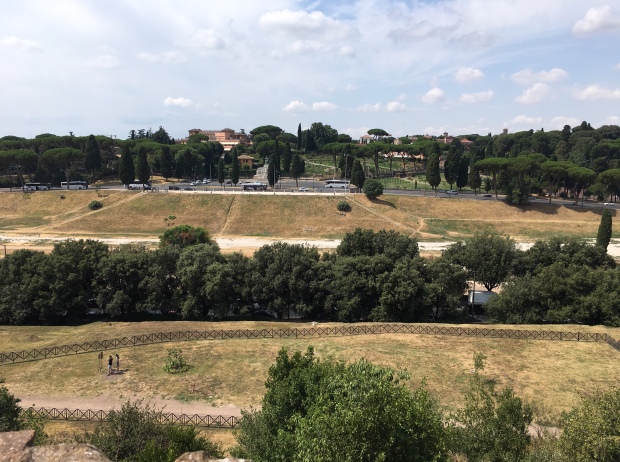 Looking out at the site of the Circus Maximus, imagining chariot races

Here we’re still on Palatine Hill, now looking over at the site of the Circus Maximus, in the background. Folks, this is where they held chariot races.

There’s not much left to see except for the outline of the track itself, but it’s still fun to imagine the scene many centuries ago. 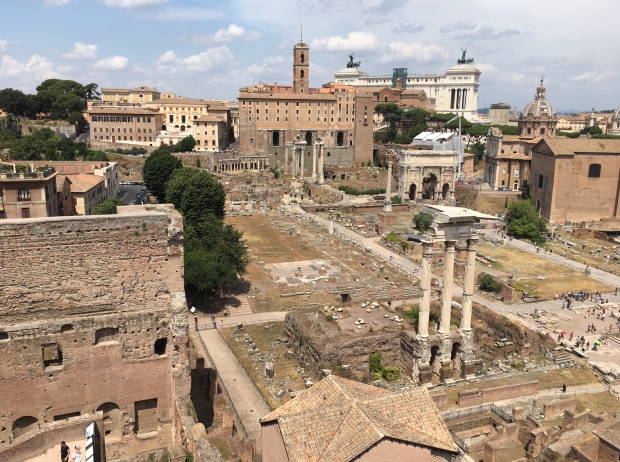 Looking down at the Roman Forum

The Forum was the site of government and the courts. If you look closely you can see the bases for lots of pillars. Imagine them supporting a huge rectangular structure.

For someone like me, trained in law and public policy, looking over this historical site was breathtaking. 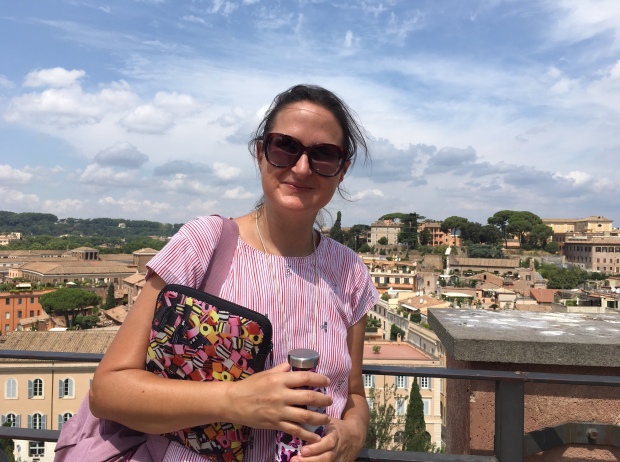 I would be remiss if I did not include a photo of Giulia, whose deep well of knowledge, easy going manner, and sense of humor made the tour feel like a walk with a long-time and very intelligent friend!

Before my trip to Rome, I figured this was a one-and-done visit. I knew that I could squeeze in some quality sightseeing while participating in this conference, and I assumed that would be plenty enough to satisfy my curiosity about the city. But after sampling some of the city’s history and culture, not to mention consuming a good share of gelato, pizza, and pasta, I now understand why Rome attracts so many returning visitors. Perhaps one of them will be me someday.