Last week I finished Harry Potter and the Sorcerer’s Stone, the first in the series. A few days ago I started in on book two, Harry Potter and the Chamber of Secrets. As I wrote a few weeks ago, I’ve never been one for fantasy literature. But I’m now comprehending what the Harry Potter hype has been all about. J.K. Rowling is a brilliant, clever, imaginative, and socially intelligent story teller. And going from book one to two, I am bearing witness to her growth as a writer.

Of course, I may be biased because the stories are placed in a school setting. Hogwarts is basically a junior high and high school boarding institution, albeit a quite unusual one. But because of ongoing references to specific books and courses — a wonderfully imagined “curriculum” on Rowling’s part — it also feels like a sort of Cambridge or Oxford for junior apprentice witches and wizards.

I don’t know if I’ll read the entire series straight through, but I’m betting that I will finish the books by sometime in the fall. It’s fun to lose myself in that world, so I’ll savor the stories rather than speed through them. No need for a Nimbus two thousand here.

I may be just embarking on year two at Hogwarts, but in real life I’m finishing another academic year. Grading final exams and papers isn’t nearly as bad as taking them, but nevertheless I still manage to summon the procrastinatory habits that served me so  steadily in college and law school. This has been an exhausting semester for reasons that have little to do with my courses or students — let’s just say that the internal politics and drama of academic institutions can be very draining and unnecessary — so I will be happy to close it out.

On a local note, we’re finally seeing some real spring weather here in Boston. I shot the picture below on late Wednesday afternoon. It’s right outside my subway stop in Jamaica Plain, and after exiting the station I sat down on one of the benches and did a bit of reading and catching up on e-mails. For a while I forgot about the pile of exams and papers awaiting me! 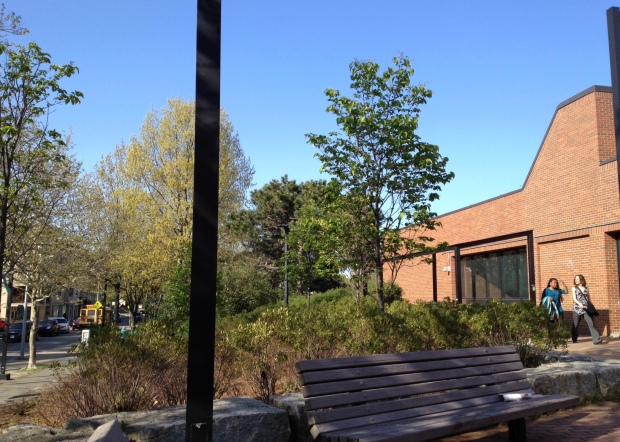