Welcomed year-end perspectives from across the pond 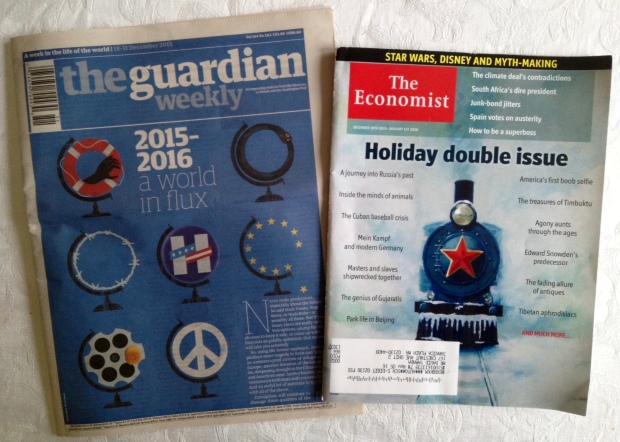 Visits to England over the years have given me a great appreciation for two venerable news periodicals published there, The Economist and The Guardian. A venerable staple in England, The Economist, has become very popular in the U.S. The Guardian, a long-time British daily newspaper, now offers a weekly edition perfect for those of us in other nations.

Of the two, The Economist is the better known. Published since 1843, it favors free-market economics and globalization, while staking moderate and occasionally liberal positions on social issues. All articles and editorials are unsigned, and great care is taken to produce each issue with a consistently understated, analytical, and often witty tone of voice. For liberals like me, it offers a thoughtfully reasoned, contrasting point of view.

The Economist‘s holiday double issue has long been an annual treat. Loaded with features on lively, quirkier, more offbeat topics than its normal fare — see the pieces under “Christmas Specials” from this year’s holiday issue — it’s an enjoyable way to spend a more contemplative turning of the calendar.

The Guardian has made a big American visibility push in recent years, especially online, with increasing coverage of major news events in the U.S. With its generally liberal social, political, and economic perspectives and a punchier style of writing, its weekly edition — global in scope and drawing from the Observer, Washington Post, and Le Monde — is emerging as an informative, left-leaning counterpart to The Economist.

The Guardian Weekly‘s year-end issue isn’t quite as elaborate as The Economist‘s, but it, too, is an informative assessment of the year behind us and in front of us.

Both periodicals are somewhat pricey as print subscriptions, so some may prefer to check them out online. For news junkies like me, they offer interesting, informed, and global alternatives to so much of the celebrity-driven drivel of typical American “news” coverage and the noisy, sound-bite yammering of our cable news stations.