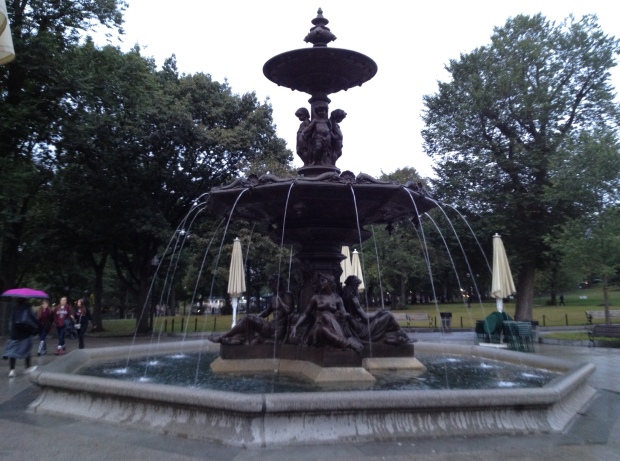 Friday was a raw, wet, overcast October day here in Boston. For me, it meant that fall has truly arrived in New England. As my wholly repetitive earlier posts about fall attest (here and here), this is my favorite and most nostalgic season.

The change of seasons from summer to fall is rooted in the equinox, an astronomical term. As explained by Wikipedia:

An equinox is an astronomical event in which the plane of Earth’s equator passes the center of the Sun. . . . The Astronomical Almanac defines it, on the other hand, as the instants when the Sun’s apparent longitude is 0° or 180°. . . . The two definitions are almost, but not exactly equivalent. Equinoxes occur twice a year, around 21 March and 23 September.

The month will culminate with Halloween, that most candy-coated of holidays. It will include a viewing of It’s the Great Pumpkin, Charlie Brown, a childhood favorite that still manages to get me in the Halloween spirit.

But Halloween is about much more than empty calories and chocolate fixes. Its origins are grounded in religion and death. Again, from Wikipedia:

Halloween . . . is a yearly celebration observed in a number of countries on 31 October, the eve of the Western Christian feast of All Hallows’ Day. It initiates the three-day religious observance of Allhallowtide, . . . the time in the liturgical year dedicated to remembering the dead, including saints (hallows), martyrs, and all the faithful departed believers. . . . Within Allhallowtide, the traditional focus of All Hallows’ Eve revolves around the theme of using “humor and ridicule to confront the power of death.” . . .

According to many scholars, All Hallows’ Eve is a Christianized feast initially influenced by Celtic harvest festivals, . . . with possible pagan roots, particularly the Gaelic Samhain. . . . Other scholars maintain that it originated independently of Samhain and has solely Christian roots.

Perhaps it was inevitable that ghosts, goblins, and haunted houses would eventually enter the picture!

I’m in the right part of the country for religion and the supernatural to mix. It’s a combination that goes waaay back. Rosalyn Schanzer opens Witches! The Absolutely True Tale of Disaster in Salem (2011), a short, lively, fact-filled narrative of the Salem, Massachusetts witch hunts of the 17th century, with a description of the Puritan mindset of the day:

Yet with all their fine intentions, the voyagers had brought along a stowaway from their former home — a terrifying, ancient idea fated to wreak havoc in their new land. For the Puritans believed in the existence of two entirely different worlds.

The first of these was the Natural World of human beings and everything else we can see or touch or feel. But rooted deep within the Puritans’ souls like some strange invasive weed lurked their belief in a second world, an Invisible World swarming with shadowy apparitions and unearthly phantoms in the air.

Good little introduction to the story of the Salem witch hunts

It shouldn’t surprise us that this New England milieu has produced legendary writers of scary stories such as Stephen King and H.P Lovecraft.

After polling friends on Facebook and elsewhere for their Stephen King recommendations, I bought a small bagful of his books (Pet Sematary, It, and Needful Things), all with Maine settings. This one is first up on my reading list:

In his new introduction to Pet Sematary, King calls it his scariest book, so much so that he believed it would never be published.

In other words, it’s a great choice for an October reading.