Too many road warrior gadgets? 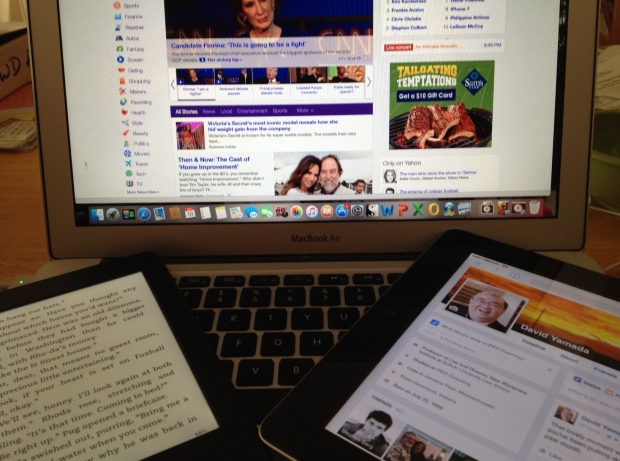 ….and add my iPhone, which took this photo

This week I took a super quick, one night trip to Washington D.C. for an awards banquet, and I found myself chuckling over how much gadgetry I was packing for my short sojourn: My MacBook, iPad, Kindle, and iPhone. (Yeah, I’m mostly Apple these days.) That means four charging cables as well.

Curiously, on balance, I’m a light traveler. For all but the lengthiest of trips, I will travel with a backpack and a roll aboard bag that fits comfortably into even a small overhead aircraft bin.

So why all the gadgets?

For starters, the laptop is a work machine. The tablet is my most-used device when I’m en route anywhere…the subway, a short pitstop on a walk somewhere, and certainly out-of-town trips. The cellphone, while perhaps my least used hardware, is invaluable at times and takes pretty good photos. And although I much prefer printed books to an e-reader, the latter allows me to travel with the equivalent of a small library.

A pain in the ash

Maybe I now err on the side of taking all these devices with me because five years ago, I was stranded in Germany for several days without them and felt quite disconnected as a result. In packing, I had decided that for a short international trip, I could leave my laptop at home. Dumb move.

You see, I was participating in a conference at the University of Augsburg, and it so happened that during that time, the big volcano in Iceland was spewing out ash clouds that swept across Europe and shut down the airspace.

Now, there are worse places to be stuck than the beautiful medieval city of Augsburg, but I had not planned on an extended stay. Because my hotel had only one guest computer and the proprietor looked sternly at anyone spending too much time on it (i.e., me), I made multiple treks to the local Internet cafe in order to catch up on e-mails and keep track of the news.

After all, in a pinch, you can do some laundry in the sink or the tub, but you can’t turn your scrubbed out socks into a computer.

Perhaps the march of technology will allow me to consolidate functions into fewer devices. My current gadgets are of slightly “older” vintage — iPad 2, iPhone 4, etc. — so I’m thinking it’s time to be on the lookout for an upgrade. I was looking covetously at the newly announced iPad Pro, but I’ll wait to see the reviews.

In the meantime, I’ll continue to pack all my toys whenever I’m about to hop on a plane or a train.

Have our gadgets sapped some of the adventure out of travel? (2014)