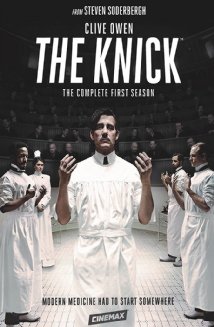 Last weekend I plowed through the ten episode first season of The Knick, a Cinemax drama set in a fictitious Manhattan hospital during the early 1900s. It stars Clive Owen as Dr. John Thackeray, a brilliant, driven, and cocaine-addicted surgeon. It has a great ensemble cast playing various doctors, nurses, hospital administrators, ambulance drivers, and board members.

The Knickerbocker hospital serves Manhattan’s poor and working class, and its medical staff attempts to be on the vanguard of treatments, diagnostics, and surgical techniques. It makes for sometimes gruesome scenes, and for this reason some readers might want to avoid it. (Think a turn of the century version of ER and you’ll have some sense of what I mean.)

Perhaps the most fascinating aspect of The Knick is how it portrays the evolution of health care as it moves out of the Victorian Age. Even those generally familiar with the history of medicine will appreciate the sense of drama in storylines about new and experimental approaches to health care.

The Knick also depicts treatments that by today’s standards are wrongheaded and even barbaric. Ambulance drivers are profiteers and body collectors. Issues of race are dealt with bluntly, including the presence of an African American surgeon whose knowledge and experience are completely dismissed when he joins the surgical staff.

And finally — no spoiler alert necessary — the last scene of the final season one episode is simply brilliant.

My cable subscription doesn’t include Cinemax, so I’ll have to wait for the season two DVDs to jump back into the world of the Knickerbocker Hospital. I can’t wait!