Wanna run for President? You can! 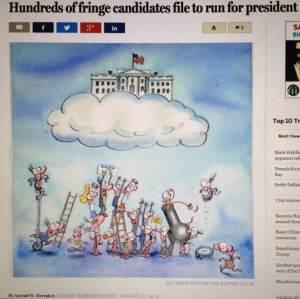 In a piece for the Boston Globe (registration may be necessary), Astead W. Herndon reports that over 500 individuals have registered with the Federal Election Commission (FEC) as Presidential candidates. You see, while it may take lots of political clout and mega-millions in campaign monies to get elected President, it basically requires filing the required FEC paperwork in order to be a candidate. It sounds easier than filing your taxes!

Of course, there’s more to it than that if you actually want to get votes, even those of friends and family. States have their own petition requirements and filing fees to get your name on the ballot, and to do that you’ll need campaign cash, connections, and a host of volunteers.

But if you’re just looking for a personal platform, you can register with the FEC, declare yourself a candidate, and rely on our Digital Age, low-cost options to start campaigning. For example, Herndon reports that one fringe candidate is running his campaign with “a website, a Facebook public figure page, and a similar profile on LinkedIn.”

I first became aware of the plethora of unknown Presidential aspirants back in college, when one of my political science professors shared with me some campaign brochures that he had collected from fringe candidates. I sent away for more, and eventually I wrote a piece on these indie wannabes for my college newspaper. A few were known quantities who had long ago faded into the political woodworks. (If the name “Harold Stassen” rings a bell, then you know what I mean.) Others were earnest citizens from various walks of life, and a good number had single-issue axes to grind. Naturally, some were simply a bit wacko.

Throughout college I was bound and determined to launch a political career and had been very active in local political campaigns and in student government. At a time in my young life when political hype fascinated me more than policy substance, I was drawn to the ease with which someone could become a candidate for America’s highest office.

Now, I’m not about to toss my own hat into this very fringed ring. I long ago jettisoned ambitions of a political career, including quixotic runs for big offices. But there’s enough of a political junkie in me still remaining to have fun thinking about what my platform and message might be. In fact, it’s pretty liberating to think about this without the need for posturing, positioning, fundraising, and currying favor. As long as you don’t care about winning, you can pretty much say what you want. Hmm….