My first camera: The Polaroid Swinger 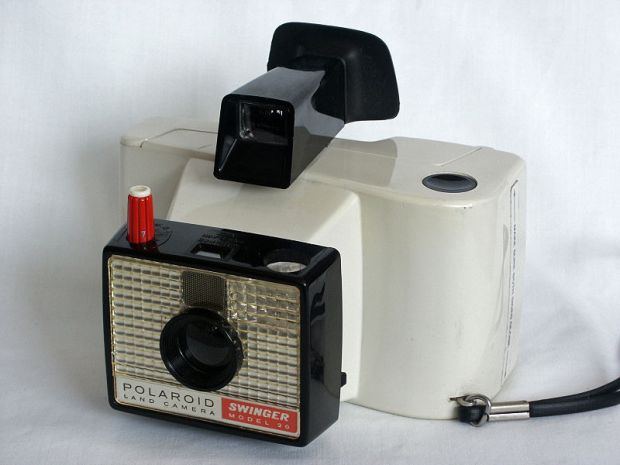 As a young grade schooler, I really wanted a camera. Already being an independent type, I was drawn to the Polaroid cameras that produced more-or-less instantaneous photos, as opposed to the Kodak-brand models that required you to take or mail your film to a photo lab to be developed. Unfortunately, the Polaroids also cost a mint, and so I assumed it would never happen.

But in 1965, TV commercials for a new model, the Polaroid Swinger, started airing, with catchy lyrics that hyped its (barely) under $20 price point: [Trivia questions: (1) Who is the leggy brunette featured in the commercial? (2) Who wrote and sang the jingle? Answers below!]

In case you want to sing along:

Don’t get me wrong; $19.95 was a lot of money back in that day. But it made it under the line for a Big Gift, and so for Christmas 1965, the Swinger made its way under the tree.

I was ecstatic. I probably took a full roll on Christmas Day alone, all 12 shots. And while I didn’t exactly become a serious photographer, I used it often and at one point had quite a stack of prints. I remember being especially proud when my Uncle Kenny asked me to take his picture so he could use it for his next U.S. government employee I.D. photo!

I also was a perfect example of the emerging power of television advertising. That darn jingle got into my head and stayed there, both before and after I received the camera as a gift.

You can read more about the Polaroid Swinger in this piece recently published on Boston.com, marking the camera’s 50th anniversary.