Gen Jonesers: Sally Draper is us 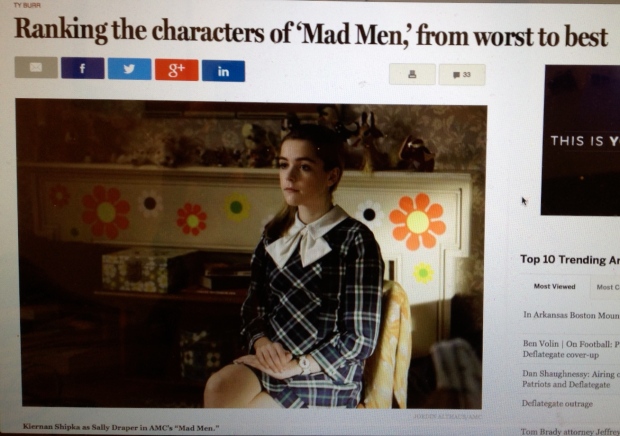 In a fun piece for the Boston Globe (registration may be necessary), TV critic Ty Burr ranks all of the major characters in AMC’s brilliant drama, Mad Men, which finishes its seven season run this Sunday.

Of course, Don Draper (Jon Hamm) ranks high on this list, as do Peggy Olson (Elisabeth Moss) and Joan Harris (Christina Hendricks). Also, for what it’s worth, Harry Crane (Rich Sommer), “the grinning office rat,” ranks at the bottom of Burr’s list.

But finishing at the top is Sally Draper (Kiernan Shipka), the daughter of Don and Betty Draper Francis, who grows into a wise, observant young woman while trying to cope with her very messed up parents. When Mad Men premiered in 2007, I doubt that many (if any) viewers imagined that Sally would become such a key character in the show. But thanks to compelling story lines and the emergence of Kiernan Shipka as a gifted young actress, Sally’s scenes are significant. Burr explains why he ranks Sally at the top:

Well, this one’s easy, especially if you’re the right age. Sally is us. . . . [H]er progress through seven seasons of TV and a decade of American cultural drama has coincided with her coming to adulthood.

Sally is us. Yup, during the first season of the show, set in 1960, Sally celebrates her sixth birthday. She’s right at the older end of Generation Jones (born between 1954 and 1965). Although by 1970, the year captured in the final season, she has clearly been influenced by the 1960s counterculture, she’s a tad too young to be a classic Boomer.

Of all the Mad Men characters, it would be most interesting to see where Sally is, circa 2015, and what the past 45 years have been like for her. She’d be in her early 60s now. What kind of life has she forged? Did she manage to overcome the dysfunctional adult, umm, role models that were part of her childhood? I don’t know if Sally at Sixty would make for much of a sequel, but I’d be curious enough to tune in for it.