It has been one of history’s heartbreaking “what ifs”: What if Anne Frank had been able to survive the typhus that would claim her for just a few weeks longer, when the Allies liberated the Bergen-Belsen concentration camp where she was imprisoned? Would she have recovered under the care of the Allies? If so, what would’ve become of her life and her diary?

It had been estimated that Anne and her sister Margot died in late March of 1945, and the Allies liberated the camp on April 15. Hence, many have contemplated the excruciating possibility that the Frank sisters barely missed being rescued.

Now, however, the Anne Frank House museum in Amsterdam estimates that she died sometime in February. From an Associated Press story by Mike Corder (via Yahoo! News):

But [Prins] said the new date lays to rest the idea that the sisters could have been rescued if they had lived just a little longer.

“When you say they died at the end of March, it gives you a feeling that they died just before liberation. So maybe if they’d lived two more weeks …,” Prins said, her voice trailing off. “Well, that’s not true anymore.”

You can read the full article for details on how the new approximate date of their deaths was determined.

The story of Anne Frank can do numbers on us. We may engage in rescue fantasies, wondering how Anne could’ve held on just a little while longer, until the camp was liberated. We may speculate, with twinges of guilt, whether her diary would have ever been published had she made it through the war.

So now the likelihood is that when Anne and Margot Frank were suffering from typhus, liberation was not just a few weeks away.

This can trigger questions that cross into the religious or metaphysical, with still more discomfort attached: Did Anne Frank die so that millions could be moved by her diary?

In 2013 I visited the Anne Frank House museum. I was participating in the biennial Congress of the International Academy of Law and Mental Health, held that year in Amsterdam, and this was the one “must see” item on my list for a first-ever visit to the city.

The exterior pictured above doesn’t give you a hint at what’s inside. The interior has been recreated to show us how Anne and seven others lived in hiding for some two years. I am among countless others to say it, but it was a very moving experience to stand in the same cramped spaces of the “Secret Annex” where they lived before they were discovered and arrested.

For me, the most chilling part of the tour was walking up the long, narrow stairwell to the Annex, located behind the moving bookcase that covered the entrance. It was the same walk their captors took to find and arrest them. Of course, it also was the stairwell taken by the residents of the Annex as they were being escorted out of their hiding place.

You may take a virtual tour of the Annex here. 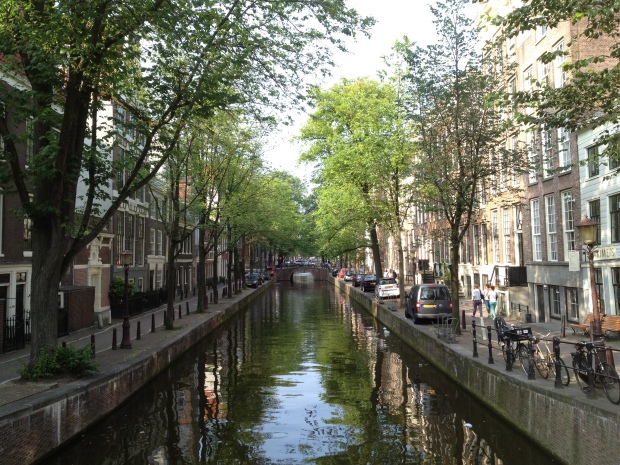 Anne Frank’s Amsterdam: Let’s finish this piece with the beauties of one of the city’s canals (Photo: DY, 2013)