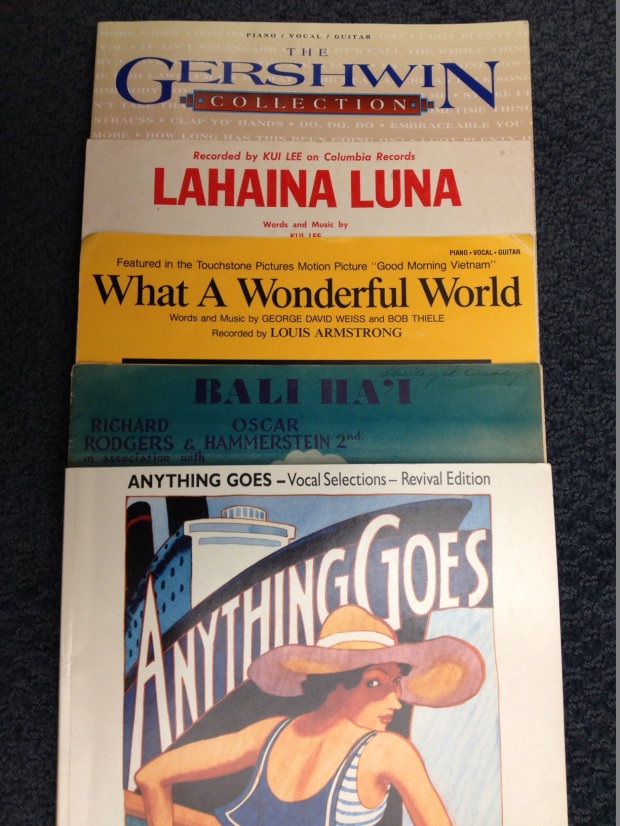 Some of the sheet music and song books I’ve used over the years!

As my first year of teaching in Boston was coming to a close during the late spring of 1995, I wanted to do something that was less cerebral and distinctly non-legal. It had been a grueling academic year that started with a move to Boston, followed by a heavy load of new courses. After immersing myself in law school casebooks, I wanted to have some fun.

I picked up a catalog from a local adult education center and spied a listing for a class titled “Beginning Voice.” I had always enjoyed singing, and based on the course listing, I assumed it would be a sort of group chorus experience. So I signed up.

On a Tuesday night in May, I showed up for the first class, and I was in for a surprise. Jane, our conservatory-trained instructor, explained the course format: Each week, every student will perform a song of their choice to piano accompaniment — solo — and then be coached in front of the group. Uh, lady, you must be high, I thought to myself. I thought this was like group chorus. For those of us new to the class (a good number were repeat takers), Jane pointed to a pile of music books and said we could pick out a song for that evening.

I nervously rifled through one of the books and found an old Cole Porter classic, “I Get a Kick Out of You” (featured in the show Anything Goes), and figured it was worth a try. Eventually it was my turn to sing, so I got up and went to front of the room. Bruce, our accompanist, started to play, and I managed to finish the song. I got some polite applause, Jane gave me a few coaching tips, and I sat down, extremely relieved.

Despite my initial surprise over the class format, I returned for the remaining seven sessions. In fact, I’ve never stopped going! I have registered for just about every session of this class since then. That’s 19 years. My repertoire has revolved around the Great American Songbook, singing old standards made famous by the Gershwins, Cole Porter, Rodgers & Hammerstein, and other prominent composers and lyricists during the first half of the last century.

Although I’ve reached a point where I’m a pretty decent singer, I don’t have huge ambitions beyond this class. Over the summer I took a workshop in musical theatre, and I’ve done some open mic nights and would like to do more. And there’s always the occasional karaoke gathering.

However, for me it’s about the satisfaction of singing great old songs. I’ve joked that this singing class has saved me thousands of dollars in therapy costs, but there’s actually a large dose of truth in it. Singing is about being in the moment, of having a safe and enjoyable haven from the ups and downs of the day or the week. I’ve made some dear friends in the process. It’s good for my soul, and a lot of fun to boot.