Was the summer of 2004 Boston’s high-water mark? 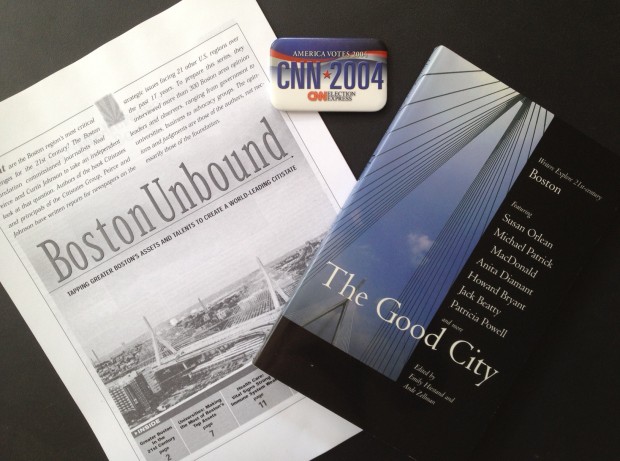 Ten summers ago, Boston was abuzz with energy. The Democratic National Convention (DNC) was held here, and during that week, nationally prominent politicians and media personages could be seen everywhere, walking about the city streets. After years of nursing a big sporting chip on its shoulder, Boston was home to the two-time Super Bowl winning Patriots (with one more to top off the ’04 season!) and to the soon-to-be World Series champion Red Sox. Overall, there was a sense that Boston was shedding some of its parochial past and becoming a more cosmopolitan, inclusive city.

The presence of the DNC was a big boost. John Kerry was the party nominee, and even if he could never approach the popularity of Ted Kennedy, it was still pretty neat to have a native son accepting the party nomination in his own backyard. In the heart of this very walkable city, you could trek from place to place observing the various convention-related events. (I picked up the refrigerator magnet in the photo above while stopping by a CNN outdoor studio at Faneuil Hall.)

That year, the Boston Foundation, a prominent and influential civic organization, released a major report, Boston Unbound, which assessed the city’s strengths and weaknesses. Although the report didn’t dodge the challenges facing Boston, its generally positive outlook captured the potential of a city ready to take its next big step.

Less wonky and more introspective, The Good City, an edited volume of personal essays about Boston’s past, present, and future, appeared on the scene as well. As a sort of literary non-fiction way of taking stock, this book, too, served as a statement that Boston was at a promising crossroads.

This month marks the beginning of my 21st year in Boston, and I have watched this city change and evolve. I believe that the summer of 2004 was Boston’s modern era high-water mark, at least to date. A vibe of punchy optimism was in the air. Some of the knee-jerk defensiveness grounded in the city’s traditional culture was beginning to recede. Painful, complicated tensions over racial and ethnic diversity, long woven into Boston’s civic fabric, were softening.

As a relative newcomer to Boston (yes, 10 years in Boston still renders one a “newcomer”), I felt that change, and in modest ways I was involved in initiatives that were a part of it.  That summer I graduated from a one-year professional fellowship program called Lead Boston, which organized monthly day-long seminars on topics related to city life and community service. I also served on the boards of two new initiatives, the City-Wide Dialogues on Boston’s Racial & Ethnic Diversity, and the Union of Minority Neighborhoods. Through my work as a law professor, I was the founding director of a grant-funded summer fellowship program for law students in the Greater Boston region who were interested in public service and state and local government.

The years since then

Looking back over the past decade, I can’t say that the buoyant civic optimism of 2004 translated into genuine transformation. Boston hasn’t exactly been stuck in place since then, but the advancements have been more incremental than dramatic. In some places, like the Downtown Crossing area in the heart of the city, we have seen a lot of deterioration. While ripple effects of the global economic meltdown have contributed toward this state of consolidation or plateau, so have shortcomings in the city’s civic and business leadership.

My own involvement in Boston community activities has declined, largely because of my immersive involvement in employee relations issues (see my professional blog, Minding the Workplace), and the frequent travel this work has required. If the day comes when I have more time for local activities, I would like to concentrate those efforts within my Boston neighborhood of Jamaica Plain, where I have lived since 2003. “JP,” as we denizens call it, is a great little part of the city, and someday I would enjoy becoming more involved in its goings on.