“The Big Lift”: World War and Cold War meet up in Berlin 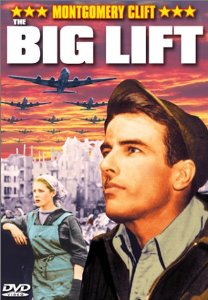 In the aftermath of the Second World War, the victorious Allies divided the city of Berlin into zones controlled by the Americans, British, French, and Russians. The first major international crisis of the Cold War was triggered by a 1948 Russian blockade of Western goods and supplies into Berlin, and resulted in the Western countries joining together in the Berlin Airlift, a massive airlift of food, fuel, and other necessities for a German populace still suffering from the ravages of the war. The blockade was lifted in 1949, with Germany divided into separate Eastern and Western states.

The Big Lift (1950) is a raw, authentic, fascinating movie built around the Berlin Airlift. Montgomery Clift leads the cast as an Air Force sergeant who becomes involved with a Berliner, played by German actress Cornell Borchers. Paul Douglas, in a lead supporting role, plays an American sergeant who carries deep anger and contempt toward the Germans. All other military roles were played by actual members of the U.S. Armed Forces.

The Internet yields mixed reviews for this movie, mostly due to supposedly uneven plot lines. However, I find the personal stories to be smartly layered into the time and place, and both lead and supporting cast members deliver convincing performances. The film’s interactions between the Americans and Germans are emotionally and politically complex, capturing how tensions fueled by both the Second World War and the Cold War shaped personal relationships.

But the real star here is post-war Berlin, where most of the movie was filmed in 1949. Some four years after the war ended, Berlin was still rebuilding from Allied bombings, and much of the city remained as piles of rubble. The movie wholly captures that reality. In addition, the aerial shots of Allied supply planes flying into and taking off from Berlin’s Templehof airport are like a documentary from the era. Scenes in the Berlin subway and city streets are gritty and real. You feel like you’re watching history.

The movie was produced as a portrayal of a major international event, but now it serves as a unique, remarkable time capsule. The Big Lift gets my vote as one of the most underrated historical dramas ever. I just finished a repeat viewing, and I’m sure it won’t be the last time.

Go here for the Wikipedia article on the Berlin blockade.