Six years ago this month, I was embarking on one of the great adventures of my life: A week-long storm chase tour, sponsored by Tempest Tours, a professional storm chase tour company.

Okay, so maybe I exaggerate, but not by much. You see, ever since I was a kid growing up in NW Indiana, I had harbored a fascination with tornadoes. When I was very young, a tornado touched down in our town of Griffith, Indiana. Mom had my brother Jeff and me safely huddled in the basement. (I don’t know if we actually were huddled; it just sounds like the thing to do when a tornado is passing over one’s home.) Fortunately our home was not badly damaged, although I remember being bummed that our swing set was blown over!

Ever since then, tornadoes had this draw upon me. Well into my adulthood, I would have dreams about tornadoes (and still do). When I read a newspaper travel section piece about a storm chase tour written by novelist Jenna Blum (a bestselling author and now among my dear friends), I tracked her down and asked her whether this was all legit. She was effusive in her praise of Tempest Tours, so I got out my credit card and signed up for their “Memorial Day Week” tour in May.

Our group of 20 or so converged on a “base motel” near the Oklahoma City airport, and we began our tour with an extended orientation on the art and practice of storm chasing, safety issues, and general logistics. Our guides were honest with us in saying that a storm chase tour cannot guarantee a tornado sighting; after all, Mother Nature is not in partnership with them. (Real storm chasing, you see, rarely involves hopping in a car or van and then quickly running into a bunch of tornadoes.) Nevertheless, they promised to do their best to show us some of the best stormy weather during our week together.

For our first tour day, it appeared that our best bet would be to blast into Nebraska, where the forecasts indicated some promising mischief in the skies for the next day. We loaded up our stuff and hopped in the tour vans for the ride north.

Within around 90 minutes of departing OKC, however, the radar picked up a small front in northern Oklahoma that had produced a supercell, a storm capable of spawning a tornado. And so began our first storm chase!

We had no idea that we had hit a surprise jackpot. This supercell would spawn multiple tornadoes. Our first sighting is pictured right below. I was awestruck; my heart was pounding with excitement. 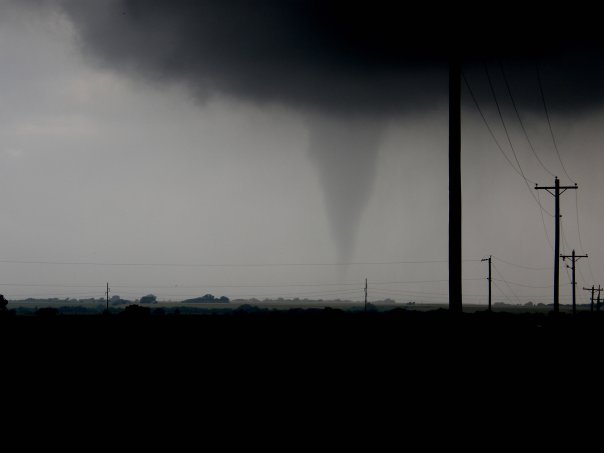 We spent the rest of the afternoon and early evening following this storm and watching numerous tornadoes. It was a singularly memorable day. Even writing about it gets my adrenalin going.

The typical chase day is not so dramatic, at least in the morning. Breakfast is followed by a morning weather briefing. Here, Bill Reid, veteran chaser and our lead guide, previews the day’s chase. 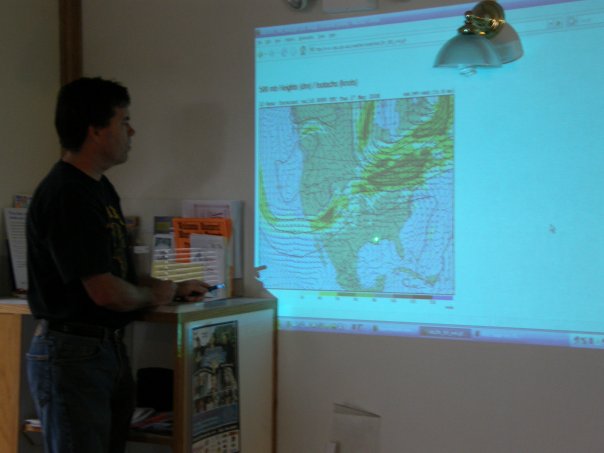 The late morning and early afternoon often involve a lot of driving to position the group for the most promising storm(s) of the day, paying close attention to evolving weather forecasts. Next comes more driving around the targeted area, followed by . . . waiting . . . waiting . . . more driving . . . and more waiting. You spend a lot of time gazing into the sky. It can be a very contemplative experience. 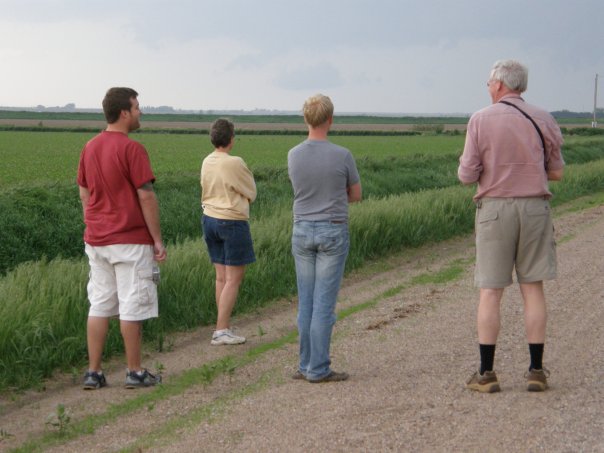 When you sign up for a storm chase tour, you start rooting for bad weather during your vacation. On days when the weather is nicer, or when your group is driving hundreds of miles to position themselves for a stormier brew the next day, you may stop at tourist-type places to see local sites, like the Monument Rocks in Kansas. 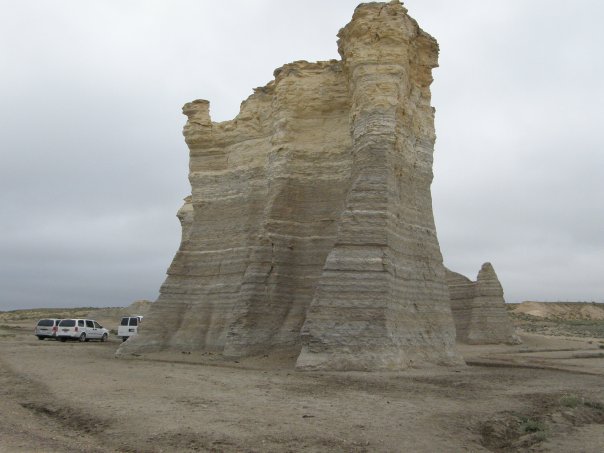 Tornadoes are not always easy to see, especially if they’re wrapped in heavy precipitation. Here’s a rain-wrapped tornado going through Kearney, Nebraska. Though the photo doesn’t capture it, we could see sparks of electricity from power lines as the tornado made its way through the town. 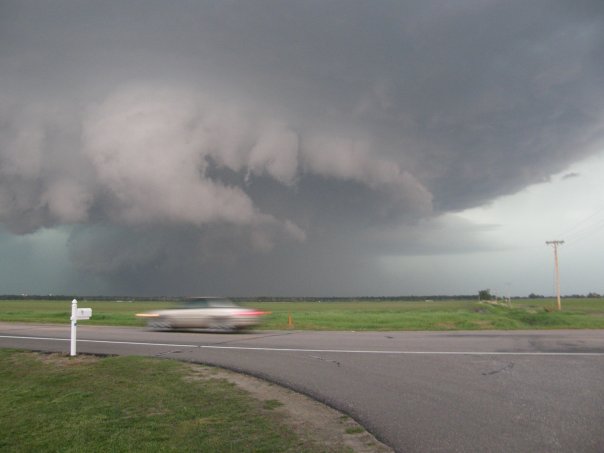 It’s not all about chasing tornadic storms. Looking into the sky while you’re in wide open spaces can be an awesome experience. Sometimes the views are simply spectacular. As corny as it sounds, it gives you a new appreciation for nature.

Storm chasing is not for rank amateurs. It’s why I’ve paid good money to travel with, and learn from, some of the best and most safety-conscious storm chasers around. If we needed any reminder of the deadly power of these storms even for those trained in intercepting them, last May a massive tornado in El Reno, Oklahoma caused the deaths of three experienced, responsible tornado researchers, to the shock and grief of the storm chasing community. The risks posed by these storms must be honored.

I’ve been on four subsequent storm chase tours since 2008. Each has been memorable. While I probably won’t be chasing this spring or summer, I’ll be checking the National Weather Service’s Storm Prediction Center regularly and turning on The Weather Channel when the skies get murky in Tornado Alley.