24: Virtually reuniting with college chums to follow the power of Bauer 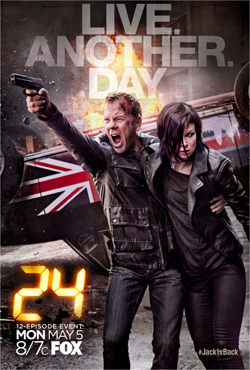 If you recognize the name Jack Bauer, then you’re undoubtedly familiar with 24, the Fox espionage and terrorism drama that ran from 2001 to 2010. If Bauer’s name doesn’t ring a bell, then here’s a piece of the Wikipedia entry on the series:

24 is an American television series produced for the Fox network and syndicated worldwide, starring Kiefer Sutherland as Counter Terrorist Unit (CTU) agent Jack Bauer. Each 24-episode season covers 24 hours in the life of Bauer, using the real time method of narration. Premiering on November 6, 2001, the show spanned 192 episodes over eight seasons, with the series finale broadcast on May 24, 2010.

24 gained something of a cult following, with its fans taking apart the many twists provided in each episode. Every hour served up a civil libertarian’s nightmare, as the, uh, goal-oriented Bauer stopped at nothing (er, almost nothing) to get the job done. With its fixed time frame and claustrophobic sense of contained reality, 24 created a compressed world of terrorist threats and violence.

For many fans of suspense TV, including this left-of-center one, 24 was a guilty pleasure.

Well folks, after a four-year hiatus, Jack Bauer has returned to the small screen in 24: Live Another Day, a 12-episode mini-series on Fox that premiered this past Monday.

The two-hour opening episode is vintage 24, with plenty of Bauer-inflicted mayhem, some of it so over the top that I couldn’t decide whether to laugh, cheer, or grimace. Putting on my law professor hat, I saw countless violations of the law, not to mention grounds for a personal injury suit or three.

In other words, I’ll definitely be following the rest of the season!

…and so is the gang

Plus, I have an added incentive to watch. With the return of 24 comes the revival of a small, super-exclusive 24 e-mail discussion group made up of three of my college schoolmates and me. We’re all graduates of Valparaiso University, today dotted across the country: Sheralynn in California, Don and Myk in Illinois, and yours truly here in Massachusetts.

For the better part of the show’s long run, we debriefed each episode and engaged in deep speculation on how the story lines might develop before the end of the “day.” Now we’re virtually reuniting again to pick up on this abbreviated season.

With apologies to Don and Myk, Sheralynn is our best reviewer. She digs into the details and typically writes a sharp summary that competes favorably with the entertainment blogs. But we three guys aren’t slackers either.

And so, through e-mails, we’ve created a sort of Web 1.0 equivalent of watching a favorite show in our dorm rooms and then kicking around the details later. All that’s missing is the pizza delivery.