Why there will never be another Great Pumpkin

“It’s the Great Pumpkin, Charlie Brown” is one of the most popular television specials ever made, premiering in 1966 and shown every year around Halloween time. Featuring the beloved “Peanuts” characters of Charles Schultz, it centers around young Linus’s yearly obsession with the Great Pumpkin, who supposedly promises to deliver bags of goodies to kids who wait for him in pumpkin patches. Here in the U.S., the program will be broadcast on ABC this Tuesday!

Something tells me that Charles Schultz was not crazy about dealing with legal matters. I watched “It’s the Great Pumpkin, Charlie Brown” just the other day (yeah, I bought the DVD a few years ago…), and I noticed how it is sprinkled with references to lawsuits, notarized documents, and other legalities, and not in a happy light!

Of course, it took a law professor’s scrutiny to pick out the legalisms, because the program is simply a lot of fun. For many of us who first watched it as kids, it brings back great memories of trick-or-treating, school Halloween parties, and scary stories of ghosts and goblins. 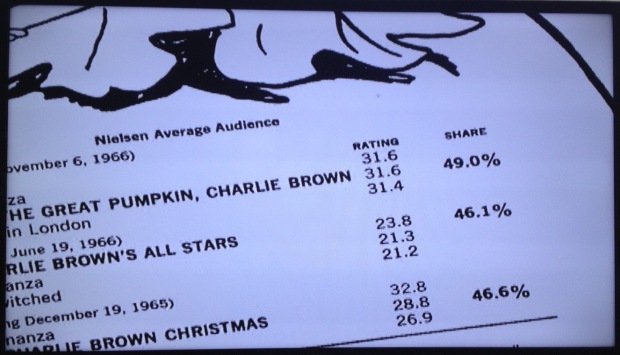 In any event, we won’t see anything like the Great Pumpkin anytime soon. Why? Take a look at the photo above, showing the ratings pulled in by the premiere broadcast of the program. The “share” means it attracted 49 percent — roughly half of the viewers — of the U.S. television audience during that time slot!

Such a market share would be unheard of with today’s multiplicity of cable stations, streaming services, and DVD rental/purchase options. Back in the day, we had the three networks and a handful of local stations to watch, and that was it! Less choice meant more of a shared experience. We’d watch highly anticipated kids’ specials on TV, and then go to school the next day to talk about them animatedly with our friends.

It’s obviously different nowadays. While I wouldn’t trade in the bounty of viewing choices we have today for a handful of channels and no way to record anything, we have lost a bit of the “popular” in the term “popular culture” as a result. We also have lost the seasonal anticipation of waiting for that once-a-year broadcast of favorite specials and movies. Instant gratification can be, well, instantly gratifying, but it’s not the same as watching the leaves turn and looking forward to the fall presence of the Peanuts gang.

A random observation on Snoopy, perhaps the most iconic Peanut’s character: He really should’ve been a cat! Think about it: He may be everyone’s favorite animated beagle (including mine), but he acts like a cat! He’s cheap with his affections, utterly self-absorbed, will dish out retribution on anyone who crosses him, and yet we love the little fellow.

Photos are screenshots from “It’s the Great Pumpkin, Charlie Brown,” and an accompanying DVD feature on the making of the television special.