My fascination with Abraham Lincoln 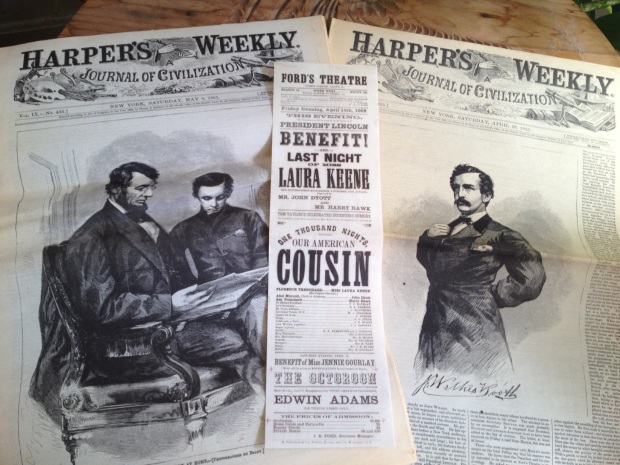 From my modest Lincolnania collection: Reprints of Harper’s Weekly following the assassination and the playbill from the fatal night (Photo; DY)

One hundred and fifty years ago today, President Abraham Lincoln (1809-65) died of a gunshot wound to the head, fired by Southern sympathizer John Wilkes Booth the night before at Ford’s Theatre in Washington D.C. It’s a story that gives me chills.

I remember when I realized that Abraham Lincoln is one of the most fascinating, compelling figures in history. It was 1986, the year after I graduated from law school, and I made a quick trip to Washington D.C. to see friends and play tourist. The latter included visits to the Lincoln Memorial, Ford’s Theatre, and the Petersen House across the street from the theatre, where a wounded Lincoln was carried after the shooting and cared for until he died.

Ford’s Theatre and the Petersen House were especially powerful and haunting; I simply felt something there about the tragedy, sadness, and enormity of what happened. I bought a couple of Lincoln biographies and dove into them. By the time I returned home to New York, Lincoln was very much on my historical radar screen.

The draw of Lincoln has continued for me, coupled with a like fascination over America’s Civil War. It is a deep interest shared with friends. For example, in recent years, I’ve accompanied my long-time friends and fellow history buffs the Driscolls (yeah, the whole family — too numerous to list out here!) to the Abraham Lincoln Presidential Library and Museum in Springfield, Illinois, as well as to other Lincoln sites in the city, including Lincoln’s law office.

Among great historical figures, the most compelling thing about Lincoln to me is his humanity. We know today that he suffered from severe bouts of depression, dating back to his earlier years. With his humble roots, we might call him a self-made man. He became a lawyer largely by private study, in the days when one could become an attorney without going to law school.

The United States was breaking apart between North and South when he assumed the Presidency in 1861. He carried the weight of the world on his shoulders during the Civil War, while dealing with the death of a young son due to typhoid fever and the devastating effects of that loss on his wife, Mary.

Perhaps to counter his sorrows, Lincoln had a sharp sense of humor and loved to tell humorous stories to punctuate his points, to the exasperation of more “refined” senior advisors and Cabinet members. His beliefs about race, while in some ways advanced for his time, would fall short of modern standards of political correctness. He was also a shrewd politician who knew how to get things done, even if it meant  bending the rules a bit.

So many great historical figures seem personally inaccessible to me. But it seems that Lincoln could carry on a conversation with just about anyone, and if we were to go back in time and bump into him on the streets of Washington (which he often walked, without security escort), I bet that we could strike up a chat with him, too.