Binge viewing and the triumph of the small screen 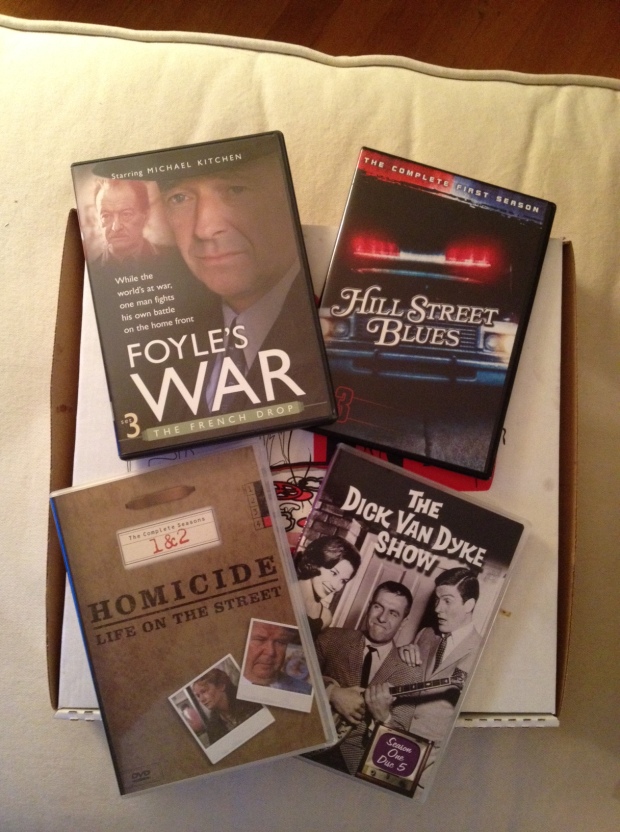 DVDs and pizza, a classic combo

The availability of inexpensive VCRs and, later, DVD players may have changed the way we watch movies, but it took newer technologies plus superb writing, acting, and production talent devoted to the small screen to revolutionize the way we watch television.

The Wire. Downton Abbey. Breaking Bad. Mad Men. Homeland. The Sopranos. Friday Night Lights. The whole bunch of great British detective series on PBS, such as Prime Suspect and Foyle’s War. The list goes on and on.

While this list may be a bit short on comedy (though I’m told that The Big Bang Theory is a winner), the number of superb one-hour drama series available to viewers today is almost overwhelming. And with the availability of low-cost DVD players, DVR recording, and subscription services such as Netflix and Hulu, we can set aside weekends or holidays to “binge view” old and new favorites.

If you want, you can follow a day of Jack Bauer fighting the bad guys (24) practically in real time. Or, you can watch the entire mission of the starship U.S.S. Enterprise (Star Trek) over the course of several compressed weekends.

A few of mine…

I’ve enjoyed many of the programs already mentioned (Breaking Bad and The Sopranos being the most glaring exceptions), but here are a few more good ones over the years, including some network shows and oldies:

If classic sitcoms are your thing, there are plenty of options as well. What about the oft-brilliant Dick Van Dyke Show? Or the homespun humor of the Andy Griffith Show? Maybe more recent standouts such as MASH, Cheers, or Taxi?

Personally, I’ve found that sitcoms don’t work as well for binge viewing, but they’re great for delivering a welcomed dose of humor and levity after a long day.

Between the core of network standouts, a host of quality productions for cable, PBS, and now streaming video, the small screen offerings make us think twice before we plunk down $10 a ticket to see a so-so movie and pay a ransom for popcorn and a drink.

How spoiled are we with all of these offerings?

Well, if you’re of a certain age (which includes most readers of this little blog), then think back to the popular network television shows of the 1970s and early 1980s.

‘Nuff said. For small-screen fans, these are the good ol’ days.